Stockings (of sorts) and other leg styles

I pulled down my stocking and found ... some sweets!

Well, it wasn't a proper stocking, it was an Epiphany stocking, like a Christmas stocking but redeemable on January 6th. In a lot of countries Epiphany is a public holiday and commemorates the story of the three kings bringing gifts to baby Jesus, hence the sweets. Here in Italy it used to be that kids got their presents delivered into their stockings on Twelfth Night by a kindly witch called Befana, rather than by Santa Claus on Christmas Eve. Naturally, the Americanised Christmas has taken over and Befana is a now lesser gift to end the Christmas season.

I've been in France several times in January and they have rather a nice tradition of an Epiphany dinner ending with an almond cake that contains a bean (usually made of porcelain) and whoever gets the bean in their slice gets to be queen or king of the festivities and chooses a queen or king consort.

Fellow bloggerette Lynn was complaining of the long road through January, but in Britain and more secular countries all the winter festivals bar Christmas and New Year have been lost, whereas here we have December 8th, January 6th and a host of other major public events, from carnival (February 14th - 16th this year), the music festival (March 2nd - 6th), the cycle race (March 20th), before easter comes. Less chance for boredom and winter blues to set in.

So I'm sorry if you clicked on my post hoping to see me in sexy stockings ... you'll have been disappointed. However, I also had a query about leggings and will do a leggings lookbook soon, but I would like to put up photos for the friend who asked to see how a short dress works with and without them. It's a style that was especially popular 5-10 years ago, a little less so now, but still perfect for spring and summer.

For me this was something of a signature look at the time.

Much as I would like to comment on the world situation, it would be better to keep this post more relevant to a trans blog as, quite frankly, I'm sure most readers are more than fed up by what's going on.

This song, "Prisoner of Gender" by Adèle Anderson of the Fascinating Aida trio, has been in my mind this week:

The introductory speech by Dillie Keane on Adèle's bravery in being publicly out about her trans status and the trust within the group is worth listening to as well as the song.

Lots of past photos above, but given that, until today, there was nothing but heavy rain from New Year on, I thought I'd put up this picture from three years ago. The rain's all right if you cover up! But this was taken in London, where rain is all part of the winter traditions (and the summer ones too!) 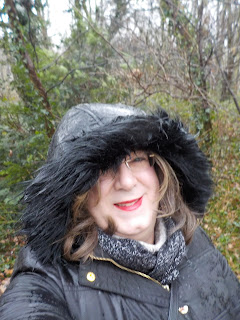