The battle of the hair

Not the hair on my head, which is a lost cause, but the hair on my body. It's definitely male pattern (in both cases), and this is one thing that does distress me, especially as I feel a lot of my other physical features are feminine.

I got a new trimmer for brows and nose hair the other day as my pretty little BaByliss kit is, sadly, wearing out after some years of good service. For legs and body I am currently using a razor, which is fine but needs constant reuse, ideally every day. Epilation lasts longer, I know, but my epilator is currently in storage. Waxing is best of all for smoothness and a look that lasts 2-3 weeks.

Many people have said that body hair weakens over time the more you remove it. Although I have noted that the pain from waxing and epilating reduces the more one does it, I have never really noticed any reduction in growth, thickness, coverage or strength of hair in all these years. Am I just unlucky? This winter, I didn't take much care over my unloved hairs with the result that my brows looked like the processionary moth caterpillars that are a curse in these regions at this time of year. This despite 20 years of threading, plucking, waxing, trimming and any number of other applications.

As I said, it distresses me. Nothing screams "man in a dress" more than unsuitable hair.

I was upset to hear of Judis Andersen from Ukraine who, despite having F on her passport under Ukraine's gender recognition laws (available since 2017), was detained by the authorities who require every man under 60 to remain to fight. Judis is not a man; she even has the right documents to prove it. This has happened to other transwomen, it seems, and she claims it is simply the transphobic attitude of border guards rather than any actual legal problem.

Some transwomen might wish to stay and fight but Judis does not and as she is legally female she should be entitled to leave if she wishes. 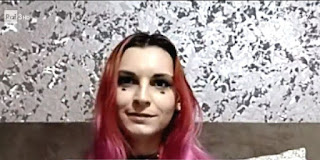 Maybe one shouldn't grumble too much about how Ukraine is conducting its war given the violent inhumanity of the enemy it faces. But I hope Judis will be recognised as exempt shortly.