I hung up my stocking last night and this morning it was full of treats. "Hang on, Sue," says the reader, "surely you mean you did that on Christmas Eve?"

No, as I explained this time last year, today is the day where kids here in Italy get presents from a good-natured witch called Befana. At least traditionally. Nowadays they go for Santa Claus instead, like everywhere else. I guess it's another case of a multinational taking over a local business.

In last year's post I also promised a leggings lookbook sometime, which I will do soon. I did several lookbook and tips posts last year such as winter boots, swimwear, perfumes, nail prep and a long series on hosiery (stockings, tights, fashion, matching, practical advice, acquiring). Thanks for your positive responses to those. 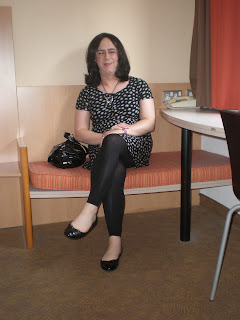 But this week I'm trying to look after my health. I have a very awkward health problem that, in its more extreme manifestations, makes my body temperature drop when vertical but overheats me when horizontal. So I freeze by day and boil by night. Maybe I need to lean at 45 degrees to be just right! This is the main reason why I moved to somewhere where extremes of climate are rare (it's usually around 15C/60F in winter and 28C/82F in summer). But on Sunday I still suffered overheating that gave me a headache so powerful it made me vomit for much of the day. No doctor has yet been able to diagnose the cause of this affliction despite all the tests they've done on me. Moving somewhere with a more even climate was the suggestion and it's certainly reduced such attacks, so this was unusual.

I've now been able to join the national health service here so yesterday I travelled by train to collect my health card and various other documents that had arrived for me as a new citizen.

Do you remember the days when you went to a station, bought a ticket and got on the next train to your destination? No more: now you have to book a seat and have your ID and Green Pass (i.e. vaccination certificate) checked by the police before going to the platform. Once on the train you must wear a mask of FFP2 grade or above, then have your ticket, reservation and Green Pass checked by the guard. No vax, no travel. This is extreme. And restrictions here are getting more severe even as vaccination becomes compulsory. In Britain, by contrast, official policy seems to be to "let the bodies pile up", as the Prime Minister so charmingly put it. And there are as many variations on these extremes as there are countries. In the '90s I worked on sickness and pandemic strategies that the government of the day endorsed and I can safely say that few recommendations have been followed, notably a worldwide problem being dealt with piecemeal by petty national and local bigwigs rather than globally. Look after yourselves as best you can. You are your own best guard against ill health.

I put on a lot of weight over Christmas as expected and now I am heading back down gently. I wonder if I will be in the healthy weight range by this summer? I hope so, but I'm not going to rush it because that too can be unhealthy.

Wishing you the best possible health this winter.