Thanks for comments here and on Facebook on my previous post on 'passing'. A lot of views and experience shared and I will follow up on passing, blending in and public acceptance soon.

This week, though, I have been getting my finger and toenails ready for the glamfest that is autumn. Summer is my favourite season but outdoor activities and lazy days don't lend themselves so well to careful care for one's nails. So I am now, day by day, improving the look of my hands and feet by carefully clipping, filing, smoothing and evening out my nails ready for a good varnishing when they are all even, uniform and smooth.

I could go to a nail bar but I find that, for the time and expense, I might as well do it myself. OK, I know the beauty salon is also a place for a good girly chat whilst having the treatment, but maybe I like to be in control!

So here are some top tips for top tips. Often one has so little time before a night out that one does one's best with the time available. Some stick-on nails will do! But the nails that nature gave you are best, in my view, if you can get them right. I find a week or two's preparation is advisable for growth and to reduce unevenness, chips, hangnails, excess cuticle and so on, if you can devote the attention. I also think investing in good quality tools is so worth it despite the price that may seem shocking at first. But 10 pounds/dollars/euros for a file/scissors/tweezers that will last for years pays back in the long run. Here are some of mine: 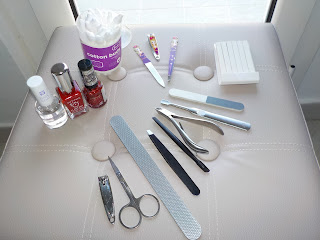 From bottom to right we have straightforward nail clippers and scissors, a top-quality indestructible file (indispensable!), best-quality tweezers, plastic cuticle stick, steel cuticle nipper, steel cuticle pusher (also good for scraping off tough varnish), fine smoothing and buffering stick (for the top of the nail). The file and tweezers were about £10 each but so worth it.

Whilst there's a lot of stuff described for cuticles, you need to go easy on them, just remove loose or excess skin. The practice of removing or pushing back the cuticles that cover the base of your nails is unhealthy as they are there to stop dirt and germs getting into the new nail growth. When I first wore false nails, the beauticians pushed my cuticles right in to make the nails sit better, but this is unwise. Yes, you might tear the cuticle on removal of false nails, but that's better than losing the cuticle altogether.

If you've never tried a buffer block to smooth and shine your natural nail, I recommend it. One I had worked so well I hardly needed varnish! A four-sided block with faces from rough to smooth and a bit of time dedicated to the task can give amazing, beautiful results and is not expensive.

The pretty little 3-item nail set at the top (from Pylones) is lovely but not best quality so it's an item for keeping in a handbag in case of nail breakage when out. The matchbook of nail files (top right) is also for the bag and is great as you can just tear off a file as and when needed and dispose of it when done.

The nail varnish on the left is a clear base coat, a main coat and a sparkly top coat in this instance. I think I'll give my toes a sparkle this year.

I usually wear just base coat on an everyday basis. It gives a delicate sheen and protects nails better from chips and breaks.

I generally use cotton buds with nail varnish remover as they're more accurate (the remover doesn't go all up my fingers which is the problem with cotton balls or tissue) and they hold a lot of liquid.

When I'm ready to paint I'll post a photo! I don't think it'll be anything really fancy but I came across these amazing transgender flag nails on Lin's blog (linvant.nl), which is a feast of amazing nail designs and well worth perusing.

Not related to the above, I was watching early silent-era comedies (Buster Keaton, Fatty Arbuckle, Mabel Normand, etc.) and I came across Julian Eltinge, a very popular female impersonator of the early twentieth century, now almost forgotten.

There were many men specialising in such theatrical roles at the time and a reasonable guess is that many were actually trans, needing an outlet for their femininity. Eltinge's uncanny ability to play a female role elegantly and straight, in contrast to the often trashy performances of his peers, and his constant choice of such roles, whilst putting on a gruffly masculine façade when not en femme, makes me suspect that he was trans. The assumption by his biographers (below) is that he was gay. (I do grow tired of this constant assumption and illogical equation of crossdressing with homosexuality). We cannot be sure, though, and who can blame him for being silent on this point in the more judgmental age that he lived in, when so many of us still live in stealth of some kind even in this more accepting era.

At my school, which was for boys only, there was a need for boys to play female roles whenever a play or musical was put on, and the same boys tended to take on feminine roles in several different shows over the years. Like Eltinge, they would put on a masculine mien when in class or outside (one joined the army), but seemed to slip comfortably into their feminine role when on stage. Yes, I wanted to be one of them but my family wouldn't have worn it. Eltinge's father beat him when he heard he had been playing female roles as a youngster. I suspected I'd have had similar grief. 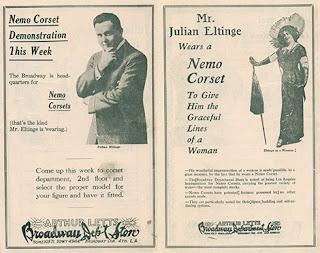 There are potted biographies of him and more photos on these sites: Los Angeles Public Library (link here), Wikipedia (link here), The Legacy Project (link here). There are a few film clips on YouTube and this documentary sample:

An interesting person from an elegant age.