More Pride news that has cheered me up.

Here in Italy there have been impressive turnouts at various Pride events over the weekend. Milan, for instance, saw 300,000 people celebrating. That's 10% of the entire population of the city and its surrounding province. It's the 50th anniversary of the first Pride and the first proper event after the pandemic, both of which likely contributed to a larger turnout, but I dare say some worrying pressures put on the community by repressive groups had an effect, too. The recent suicide of a trans teacher after endless abuse has highlighted the long way to go to equality and security.

I can't resist this classic Milan tram in rainbow livery!

I was also pleased to hear of the huge turnout (1,000,000+) in London where I used to live. The UK government's refusal to include trans people in a conversion therapy ban was certainly one theme of the day.

I said I'd share more positive news this month and the huge numbers of people who have been prepared to turn out and be seen and counted is amazing. The LGBTQ+ community is very much bigger than detractors claim and our allies and supporters are growing. There's nobody now who doesn't know relatives, friends or colleagues who are queer in some way.

I feel a boost of confidence since my last post with huge, successful days like these and similar parades and events in smaller centres popping up increasingly. We are a large community; a minority, yes, but not negligible.

I seem to have solved the issue with being unable to reply to comments on my blog. One or two other blogs still won't let me comment - maybe something to do with cookies. I'll keep working on that. Thank you for all your comments.

A photo when sporting a casual look at my local park back in July 2013 when a trans friend, Gillian, came over for the afternoon. You don't always have to look superglamorous and dressing like the other women around has always been, for me, the way to go. 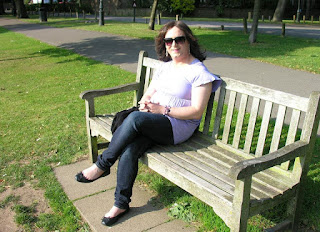 Email ThisBlogThis!Share to TwitterShare to FacebookShare to Pinterest
Labels: Pride