Integrity and the TGirl

Two years ago I mentioned an exhibition of photographer Lisetta Carmi's work documenting the lives of trans people in the 1960s (link: Trans lives in the 1960s). I'm sad to say that she passed away the other day, although at the grand age of 98. Her book about the subject was very controversial as it highlighted a large subculture that people had preferred to ignore. Having been the victim of anti-Jewish laws and proscriptions in the 1930s-40s, and having felt that she wanted to be a boy when younger, her many projects documenting the realities of the lives of society's underdogs were non-judgmental and the subject matter spoke for itself without much need for commentary. 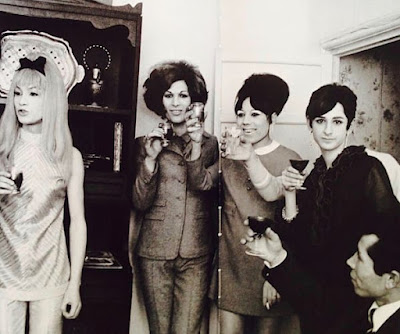 I am pleased to see that the DSM, that bible of behaviour that has always included much about being transgender, has been updated with some more sensitive definitions (see this post from Crossdreamers here). I do like the definition "experienced gender" replacing "desired gender". For my part, I've never desired a gender, just experienced one that is not so common.

Living one's reality and recording that of others involves integrity. I have never been much bothered about a person's beliefs or politics because if they are a person of integrity they will do the right thing. It's the abusers whose philosophy one needs to watch. No amount of abuse and threats by transphobes alters our reality though it may alter our behaviour to avoid violence or punishment.

I think it worth mentioning this on the day when a certain Boris Johnson may be resigning as British Prime Minister, "in due course, at the appropriate juncture, in the fullness of time, when the moment is ripe, when the necessary procedures have been completed, nothing precipitate, of course," to quote Sir Humphrey from the '80s sitcom Yes, Minister. Johnson, like Trump, like Putin, is a man with no integrity whatsoever. That wholesale absence of integrity in oneself and the inability to understand when it is advisable to pretend to have it, is a rare trait but you can see the chaos and misery that it brings to millions. The transphobia that has erupted under the premiership of this individual, which was not found even under his psychopathic predecessor, is one of the legacies of his inhumanity. I have found little integrity in government at any level over the course of my life, but we seem to be at the nadir.

I have two friends coming to stay with me for a few days so I may not be able to post again for a week or so. They are the first guests I will have had since moving to Italy nearly four years ago. Thanks Covid! I hope they'll enjoy their time with me. Let's hope the weather remains nice but stops being quite so hot and dry as it has been this week.

They are a gay couple who know I am trans and have met me as Sue, though they don't understand why people are trans. But they accept who I am, and that's what counts. After all, do we ourselves understand what it is that makes us trans? Not really, and the many rewrites of the DSM reflect that. Anyway, here's to fun and mutual respect with other LGBTQ+ folk.