Kids are merely imagining they are trans, says the psychiatrist

I mentioned briefly in my last post that I had friends to stay and that one is a psychiatrist who works mainly with children.

A vein of humour can been mined when a psychiatrist turns up in comedy shows. One thinks of the psychiatrist who stays at the Fawlty Towers hotel describing the acerbic owner, Basil Fawlty, as having "enough material there for an entire conference". Or in the various incarnations of The Hitch-Hikers Guide to the Galaxy, where the President of the Galaxy, Zaphod Beeblebrox, has a 'private brain care specialist' with a German accent who is often interviewed about the President's state of mind and invariably ends the questioning with the non-committal "Vell, Zaphod's just zis guy, you know".

I'm pleased to say that my psychiatrist friend also has a strong German accent this makes him authentic in the best tradition! However, what he said about transgender children wasn't all that funny, I thought.

To summarise a long chat, according to his experience, his training and his school of psychiatry, no-one can know they are transgender until they are about 14 so that treating kids as transgender before then is wrong. This is because, prior to that sort of age, kids play lots of games, indulge in frequent role-playing and imagine their place in a made-up world. There is so much fantasy in early years, he said, that swapping gender role is merely an aspect of childhood play and it is inappropriate to treat that as a determinant for the future.

Now, no-one could argue that kids aren't full of fantasy and imagination. They love playing roles and pretending to be all sorts of things. But if this is a game, then I've been playing it for 50 years! The only variation in my feeling trans is the intensity with which that conviction has existed throughout my life. And whilst it is true that some people, especially children, do actually swap gender roles for a little while before reverting to their designated gender, there's a deepset innate sense in a trans person that their place in life is with the gender they experience and identify with, that it's no game and that they're not making it up. We do not have the vocabulary to describe this conviction nor are we able to say convincingly "I feel like a woman/man" since no-one can accurately describe what feeling like a particular sex is. Most people whose sex and gender match never even give this notion a thought.

So I said that gender dysphoria and childhood fantasy games might seem similar to an outsider, but that imagination had no direct connection with the trans experience. I also had to point out that his training, unlike that of a doctor, did not involve studying biology, and that fields like genetics, endocrinology, evolutionary biology, ecology and so forth reveal distinct possibilities that being trans is a natural and inevitable consequence of genetic makeup, of hormonal differences, of environmental factors, of evolutionary pressures and many other physical forces at work in nature which have nothing to do with the mind. I also pointed out that I had taken part in various studies into trans people, including the 2010 Kennedy/Hellen study on when trans people perceive their gender incongruence. The overwhelming majority have done so well before 14. I myself am typical in that I felt I wanted to be regarded as a girl when I was about 5-6 years old (there's a useful chart on p.4 of that study). And that's never changed. The main reason I have never transitioned, even though I would love to live as female all the time, is that the self-preservation instinct and social pragmatism have so far overridden my natural feminine instinct. When you are brought up in a brutal and judgmental environment, and society is not always accepting, acting safely is essential for survival.

As far as his own field was concerned, I also pointed out that transgenderism was being regarded ever less as a condition requiring mental health intervention but more of a natural experience. The rewrites of the DSM, for instance, bear witness to that.

This all seemed to be news to my psychiatrist friend. He still suggested that the happiest life for me would be to conflate my feminine side with my masculine one and meet in the middle, which annoyed me, partly because I hadn't asked for some clinical diagnosis but mainly because my male side is merely a public mask for self-preservation purposes, whereas my trans feminine side is that actual real me and not some game. Frankly, this discussion left me feeling that psychiatry has limited benefits when dealing with trans people. I can see from my own experience of visiting gender clinics, from general discussions with trans friends especially transitioners, and from everyday interactions, that a lot of people who transition have underlying conditions such as autism or bipolar disorder, much more so than in the general population, and that they could benefit from intervention by psychiatrists to assist with informed, practical decisions on transition rather than the often precipitate or extreme approach that some trans people take as a result of those conditions (or indeed through peer pressure); but as for psychiatrists assuming that trans children are merely playing games, that is depressing and unhelpful and makes me wonder about the value and quality of that profession in dealing with us.

Oh well, I thought I'd mention this.

Wishing all my friends in Europe resilience in this heatwave and drought. I tolerate heat well but I confess that even I am having trouble sleeping in these hot, airless nights.

I let my herbs and salads flower and go to seed, which generates the next crop, and this also attracts little insects that in turn attract the lizards and geckos who eat them. I am now convinced that a tiny lizard has taken up permanent residence among my pots as I see her so frequently, either scuttling about or basking in the sun. I call her Laura. I don't know if the lizard is actually female, but she is to me. Should I see a shrink? 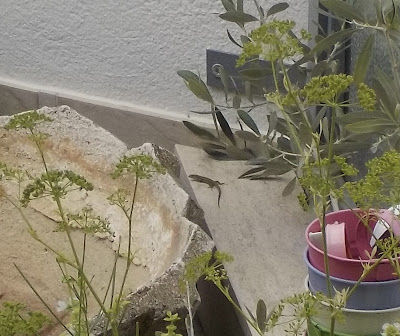