Combating discrimination at work - some tips

Having provided a lot of advice to people over the years on discrimination and bullying at work, I've been asked to share tips and best practices here. Not just with a trans slant because workplace problems can affect anyone.

In the 1990s I had several lousy experiences in a toxic workplace. These included threats of violence against me, witnessing racial discrimination and abuse, corruption, and of course the endless bullying and mobbing all round. I moved from this violent, corrupt department to another where my new boss was soon replaced by someone insane. Her temper was so uncontrollable she would even kick the furniture. Stuck in an unhappy marriage because her religion rejected divorce, but desperate for children, she became obsessed with sex and her conversation revolved around having babies. Not being emotionally involved with hubby any more, she would (and I'm sorry to be graphic here) masturbate at her desk to relieve her sexual frustration and would make suggestive, creepy or abusive remarks when not shouting her head off in rage. My complaints to management fell on deaf ears until I took the matter up with a senior vice president, and I was finally taken seriously. My subsequent role led to my being injured at work and my employer's health and safety failures led to my suing them, successfully.

These experiences poisoned my desire to continue with a career in that line of work. But since I had had so many discussions with legal and other advisers that I had gathered enough information to be of use to others as well and I am pleased to have been able to give advice to trans people being bullied or discriminated against so that they too got suitable compensation.

There are two main pieces of advice I would give to any working person:-

- You need representation and support now that we are living in an employer's market. Join a union and/or professional body. If you are in a minority of some kind (like being trans), join a representative organisation too.

- Keep a diary of workplace issues, even if things appear fine. Anything, even trivial-seeming, that somehow makes you uncomfortable - from casual remarks to equipment problems - should be recorded. This diary may prove invaluable as evidence later. Not to mention keeping evidence such as memos, emails and so forth.

As well as employment or safety laws that are supposed to protect you, your employer or contractors or clients will have contractual arrangements that might go above and beyond the law. They might, for instance, award sick pay that is higher than the legal minimum, or provide a safer environment than specified by health and safety law. Your employer may have additional personnel policies that promise non-discrimination on the basis of sex, ethnicity, orientation, etc.

But, as you can see from my own experiences, and quite likely from your own, the reality is that things frequently fall short because personal issues such as prejudice, jealousy, ambition, aggression, mental illness, etc. get in the way of staff behaving perfectly. It's how your employer responds that counts. If their grievance mechanism works well then you will simply have had an upsetting experience but it will have been remedied; if their procedures are poor or are corrupted, then dealing with issues can be almost as bad as the issue itself.

If you have to make a complaint involving another member of staff then you can expect the situation to worsen for a while as they defend themselves. This is the chief reason people don't complain when they should - it poisons an already poisoned situation still further. The fear of recrimination is a very real one and is often not unfounded. Mad sex boss was less than pleased at my complaints, I can tell you! Beware also of managers and teams closing ranks when a complaint is afoot. Victimising an employee who complains can also be against the law. This does set up a vicious circle of complaint and recrimination. After all, if your colleagues were decent people, the original situation wouldn't have arisen in the first place. You can expect malign people to act badly throughout.

I cannot tell you how to develop courage, but I do know that everyone has some point beyond which abuse becomes intolerable. Ideally, start expressing concerns about a situation early on rather than waiting till it has become intolerable. The problem is that so many people prefer to put up with or remove themselves from a situation rather than combating it, and that creates a harsher environment for subsequent staff once bullies learn they can get away with bad behaviour.

It may be tempting to resign. Do not do so if you have no other job lined up as you simply end up out of work with no money coming in. Proving discrimination or constructive dismissal in a tribunal is not easy. If the situation is threatening, you can make a statement to the police. If you are getting stressed, you can ask your doctor to sign you off work, and this should actually make it easier to focus on the problem and tackle it from the security of your home. It's what one friend of mine did, and negotiated an exit package; it's what I wish I had done when my troubles first started. If you need to hold a meeting on the subject of workplace problems, you will normally be able to have a legal or union representative with you, or a colleague, or maybe even just a friend.

If anyone has witnessed the behaviour you are complaining of then note their presence in the diary I suggested you maintain. If they are likely to be loyal or sympathetic to you then that's good; but beware of just assuming that a witness will tell the truth when asked to - people have all sorts of reasons for not being honest when needed.

Bullying at work is pretty rife these days, and mobbing where a gang of colleagues go at you. Bullying is not usually legally defined or even easy to pinpoint precisely but there comes a point when you know instinctively that things aren't right. Harassment is usually legally defined and if you are working as a trans person it would be a good idea to acquaint yourself with the law of your country in this area.

In these days of electronic working, more opportunities for trouble arise. People can be indiscreet, as if email or work forums are like the consequence-free environment of socal media. As Lynn pointed out in her comment on my recent post about subtle transphobia in the workplace, these days it is becoming more common for people to make requests under privacy or information law for sight of what has been recorded about them in electronic form, whether written or on video. This may be useful - and even excellent - evidence in case of a dispute. But conversely, be wary of what you say about others. That casual verbal remark by the water cooler was how office gossip worked once; now it's more on record.

This talk of legal rights is all very well but what you really need above all else at these times is emotional support. If you need comfort and support beyond what friends and family can offer that is more targeted on the problem then there are a number of emotional support charities and organisations in most countries, some of which particularly help with workplace problems and can help you see through the fog of distress to discern what the situation actually entails. A trade union or professional body can often recommend or help find such organisations.

On the emotional front, always remember this: you are OK, it's the situation that's messed up. You are not mad or mentally ill, though your psychological functioning may be impaired by distress or trauma. That's normal in these circumstances.

Transgender people are obviously one of the groups most subject to bullying and discrimination in the workplace, possibly the most subject, and that is one of the reasons why so many trans people don't come out, don't mention they are trans unless they start living and working in their proper gender. Discrimination against trans people often takes on different forms from those affecting other minorities, groups or individuals, but the same basic advice applies, which is why I've not been specific about our community here.

You may be reading this out of interest, or because it resonates with you, or because you are having a bad time at work. If either of the latter cases, then I am sorry that such a situation has arisen. The subject is so vast that I have only given outlines and basic pointers for how to act and where to get help. But always my two top tips, as above, are: don't deal with it alone - there are organisations to help with all aspects - and always gather tangible evidence.

I'll end with one comment a colleague made to me when I was dealing with mad sex boss: you spend too much of your life at work for it to make you miserable.

In my trawl through old emails, as described in my last post, I found  the jokebook I'd compiled when working for the evil people described above. I'd email a joke every day to colleagues to keep them sweet. Emailing a daily joke is a habit I got into that lasted for years after. Maybe I'll create a separate page here for my jokebook. You have been warned!

Here's a photo of me taken from my desktop when I had started working for myself. I could present how I liked and everything was better than before. It shows. 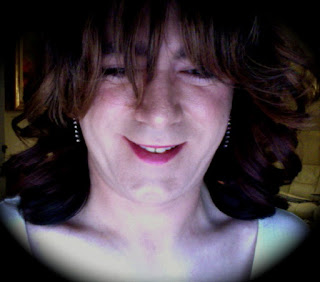