Subtle transphobia in the workplace

A couple of responses to my last-but-one post about coming out to groups described how transphobia in the workplace can be very subtle, whatever anti-discrimination and equal-opportunity policies an employer might have in place. The transphobia displayed against me by former colleagues and "friends" who appeared supportive, as described in my last post, shows how insidious it can be.

Mere lip-service to politically agreed norms is worthless, especially as one of the chief characteristics of most human beings is the need to domineer. Coming out as trans indicates that you, who may have been on a level with your group, now belong to a minority and have been struggling in significant aspects of life. What better way to squash you than to learn you actually had fears, weaknesses and differences, and that you were hiding them, not being 'honest' about yourself. Often, of course, they think you're some kind of sexual misfit. You can explain to your heart's content that being trans is nothing sexual. "It's kinda gay" is the popular belief and people feel better sticking with what they think they know rather than admitting they are wrong. And who likes gays anyway? "Gays (or transgenders) exist, sure, just as long as they don't encroach on my life," is the attitude. I found that attitude prevalent when coming out to lovers, too.

So, your workplace has a policy against discrimination and your personnel officer has gone through the motions of letting you know that your job is secure if you transition. Great. You tell your colleagues that you're called Brenda now, not Bob any more, and it's back to the day's tasks and all is well, right? It's true that few people, if any, are going to come and say to your face that they hate the new you, but some will be thinking it. And if that someone is a boss or an important client, what happens?

Here's what two transitioning friends wrote to me last week:

I had worked 13 years with an unblemished record, Most of my colleagues accepted me to a degree and I never faced any hostility from them. However the management of the building my company were contracted to,was homophobic, transphobic and racist and my company had to move me to a different site. Fortunately I have not had any negativity since. To be honest in hindsight it would have been better to have been moved at the beginning, fresh start and all.

There's a further fly in the ointment regarding coming out at work - the unprovable transphobia. When I first came out at work, I got masses of supportive emails, etc - only 1 of which wasn't 100% positive, and that just said "I don't want to know." Within months I was on suspension and being investigated for "expenses irregularities" - all but two of which I disproved. I still ended up fired for "reasonable belief of wrongdoing". Beware the smiling faces...

This is the point. Your employer may officially be fine with your transition. Some employees may not. The campaign orchestrated against the second person here was thoroughly dishonest, by a boss with a known reputation for sacking people purely for the buzz of feeling powerful. Transphobia probably came into his selection of my friend on this occasion, but that is unprovable as the official issue was made a financial one.

I've been asked about bullying, which I will write about in due course. In the 1990s I experienced some vile mistreatment at work - it still disgusts me - and in subsequent years read around the entire subject of bullying as it's not a problem I'd ever encontered before. I don't get my kicks from hurting people - I can't see any advantage to me - but for many people this is hugely important behaviour.

So, having warned against subtle transphobia that may be hard to fight against, keep a record of anything untoward or uncomfortable at work and you might need to bring evidence to support a discrimination claim. It's unjust to have to do so, but that is the world we unhabit. More advice on this in future.

Do not, however, be like two LGBT people I know who were more than hypocritical about discrimination. One trans person was in disciplinary trouble for aggression and abuse in the workplace and was trying to source the transphobia she felt was behind her employer's complaint. Given that this was 18 months after she started transition with her employer's full support, it seemed unlikely (though not impossible) that transphobia was involved. She asked for my advice, which I'm pleased to say enabled her to quit with a good exit package. However, as she went on to abuse customers in her new career (I witnessed it several times) and in the end started harassing me to the point where, for the only time in my life, I had to block her number off my phones, I can say that her employer was well justified in the action they took, which I thought even at the time had acted correctly throughout. She is simply a very antisocial person! No transphobia involved. The other person was a boss of mine who was a prominent, lifelong gay rights campaigner ... and spent his workdays bullying, abusing and discriminating against: ethnic minority, male and subordinate staff. A real sociopath and hypocrite who showed that things can cut both ways.

So transphobia and discrimination can be hard to call. Converesly, some trans people can be paranoid about every nuance in their interactions. Practical advice on dealing with workplace bullying and discrimination in forthcoming posts, then.

My last few posts have been on serious topics so here's an entertaining post from eight years ago when I described some of the 'admirers' who beset the TGirls on the scene. Be amused and horrified in equal measure at how chivalry is not quite dead but merely intubated in intensive care... 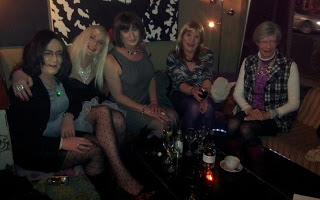