Continuing this theme of coming out, I want to talk about genuine allies, abstract supporters, and frauds.

It's hard to explain to people why we are trans. We ourselves don't know why we are, that's the problem, and there's not been a lot of scientific research done. There are tantalising glimpses from small samples that there may be biological reasons for being trans, involving genes, hormones, brains, etc. Until we know for sure we generally end up simply having to insist that being trans is for real, we are not making it up and that it's a critical part of our lives. Many, perhaps most, people shrug and say that's OK, you're happy and are not harming anyone so I'll go with it, even if it's a bit weird. If you aren't trans it's good simply to treat a trans person with respect and call them by the name they like and accept the gender they present. It doesn't involve much effort, and we give plenty of indicators like our hair and clothing as to our gender. And if, in addition, you defend people's right to exist as trans when they are criticised, abused or threatened by others, that's wonderful.

I do see memes created from time to time by trans groups as to how to treat a trans person and they often read like prescriptive machine instructions: "How to address and engage with your Transgender 3000 deluxe model"! ...Just be kind and that is enough. It's OK to ask a trans person what they prefer in terms of names or pronouns. But in the same way that you wouldn't talk about genitals or surgery to any other new acquaintance, it's not good form to do so with a newly met trans person. Really, that's about it.

I came out to my closest friends some years ago (post Telling my friends). Those who are gay, or who are in artistic or creative fields, or who are pagan, have been super supportive. Some friends, though, like former partners and lovers, were politically all in favour of trans rights, freedom to be, etc. ... just not in their back yard. But, if you date a trans person, you will have to address their very real needs to be truly themselves within your relationship, and similarly if you want to be true friends, you need to acknowledge who they really are. It's not some abstract concept that affects people in some other neighbourhood - trans people are all around.

I had one disaster with coming out to friends. I knew this group of friends would be the most difficult but I never imagined just how dishonest they would be. It's not an easy story to tell and I've paused for seven years before telling it as the disgust I feel is still very strong.

Having come out to many of my friends, there was a group of four female friends that I wasn't sure as to how they would take it. They had once been work colleagues and we got on well and saw each other after we moved to different jobs, and would meet regularly to eat out, go to the theatre and take holidays together. One wouldn't come to the theatre if there were cross-dressing roles involved; she didn't like it. Apart from that, there was no other indication of possible tension.

From 2010 I was beginning to live as Sue most of the time, was trimming my brows, growing my nails and removing the hair on my hands and arms. These changes are fairly obvious to women. One of these friends - let's call her Doris - I used to meet up with regularly, often for lunch on work days. I opened up to her about being trans in 2010 and although she seemed to take it on board, somehow after that, whenever an opportunity for lunch came up, Doris always then had some excuse as to why she was unavailable.

In 2013, on holiday with another of these friends - let's call her Meg -, I somewhat inadvertently, when talking of something else, outed myself. Meg was very supportive, though she said she was surprised to learn I was trans. Anyway, she and Doris agreed to meet me as Sue for the first time. We had a nice day in London, followed by more such days, including shopping together. This seemed great. I spent a lot of time - and I mean a lot of time - explaining trans life to them, and how trans people like to be seen and be treated and the dangers we face.

Then, in 2014, Meg seemed to decide I ought to be 'out' to more people. And took it upon herself to 'out' me to others. Apart from the inconsiderateness, and inconvenience of having to deal with these people who now knew at a time when I was swamped with work, it went against what I had said to Meg about discretion.

Then we went on holiday again and, without warning, at the same table in the same place where I had come out to her the year before, Meg spent an hour attacking me for not ever having formally come out to my parents, how the rest of the world had a right to know I was trans and what was I doing about that, and a whole load of other criticisms. To cut a long story short, she was having problems with her elderly parents and was projecting her emotions onto me; I had evidently become her 'project' and being 'out' was (she felt) going to be good for me, despite everything I had explained at length about the dangers trans people face; and she had assimilated everything that I had said about trans fears and threats to us and threw them in my face. I have a long fuse but once she started shouting at me, I exploded. Both Meg, the perp, and Doris, who is not the sharpest tool in the box, couldn't understand why I was so angry. "She's only trying to help," said Doris. But the bottom had fallen out of my world at this wholesale betrayal.

Needless to say, I knew that was the end of our friendship, after 14 years. Having gone on to further venues (Manchester and Nottingham where my friends are still friends), I went home, wrote to Meg not to contact me again, wrote to Doris at length to explain the background to Meg's abuse, and wrote to the other two who weren't there saying that I wouldn't meet Meg again. It's about all you can do but I knew I wouldn't be likely to see any of them again, and I never did. I rang Doris some months later who said I'd behaved badly in shouting back at Meg. What a waste of emotional energy spending time with people who aren't, in the end, worth it; who just don't understand, despite all the long hours explaining and educating; who are basically phonies who can't actually care at all.

There are three postscripts to this tale:-

- Meg died the following year. I normally get very upset when someone I know dies or when friends of mine lose a friend or loved one. This once, I have no feelings other than that Meg can't behave badly towards anyone again.

- I've talked to a number of trans people about this, and to two friends who happen to be professional psychologists. Sometimes, when something goes wrong, I worry that I may have misinterpreted things. But Meg gets universal condemnation for her behaviour from them. That said, constructive disagreement with me and my advisers is welcome if you see an alternative.

- Normally, I post something in this blog and there it stays. Except when I've been asked to delete or change names or photos of people who are now in stealth, the only time I have felt the need to rework some posts here were those describing my time with Meg and Doris, since my interpretation of their questions and attitude was incorrect. As initially blogged, I thought they were understanding and supportive. Boy was I wrong! Compare the post People who now know I am trans with its original title "Friends who love and care"! Another post from the time that was very popular with readers has also had to be reinterpreted: Kings and queens and jokers.

So, if you want to be a transgender ally, please:

- Never out an LGBT person without their permission. We live in danger of attack and discrimination and your outing us endangers us, quite apart from taking away our initiative and betraying trust. Most people are proud to have others confide in them and you should feel special that an LGBT person trusts you.

- Don't pretend to be supportive if you're not. You think being LGBT is weird? It's OK, we get it. We can't yet offer a clear science-based explanation for it, but it's real. If you can't handle the implications, be gentle in expressing doubt and concern and even, if you must, reduce your time with us. Even walk away. But don't be a hypocrite.

- Don't dump your emotional trash on someone else. Nothing to do with LGBT, just don't be a jerk.

That's it, just be a decent person generally. It's not hard. Thankfully, I think most people get this.

Thank you to all true trans allies. You are so important to us and we love you for your care.

There were lots of links to previous posts in the main post above. So here, by contrast, is simply a nice picture I was reminded of this week. Emma and I were at the Elephant's Head pub in Camden High Street, London, in 2013. There was classic rock and roll playing and my bloody Mary was full of horseradish, Worcester sauce, Tabasco, garlic and other spicy things. It was the hottest drink I have ever had. Very good though. 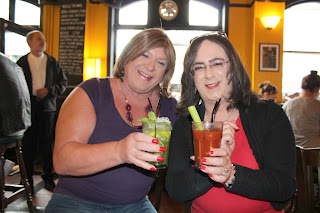