I am at last able to get a vaccine shot. I've had to wait my turn as where I live (Italy) they've been prioritising the old, the vulnerable and those in the front line like nurses and teachers, those who are in the national health system, etc., whereas I am young, healthy and merely a foreign glamour model. And that's fair enough.

But bureaucracy has to have its say and because my official address is not where I have actually ended up living I have to have my first shot in Official City not Residence City. And that involves travelling 200 miles when the motorway is closed for repairs and the trains are at 25% capacity (what with half the trains being removed and half the seats being roped off for social distancing on the remainder). This is a logistical nightmare in the height of the holiday season.

To cap it all, the government last week attempted to make it compulsory to have a vaccination certificate to travel on public transport. Hello! the only reason I'm travelling at all is to get the vaccine and the certification in the first place. Certification, I would point out, from a rubbish and much criticised IT system bought - as all government procurement contracts the world over require - from the cheapest provider. Fortunately, logistics and public outcry have made them delay on public transport certification. My painfully slow citizenship application (now in its sixth year) is therefore delayed further till I get the vaccination cycle complete. Last week the British Consul rang me as I had had more than a few complaints to make in a letter to the British Ambassador about all this administrative chaos.

Let me be frank, this pandemic has been handled abominably badly by Western governments. Places like Sierra Leone in Africa - the sort of places we in the developed world look down on - got a much better grip on it as they're used to dealing with stuff like this (Ebola anyone?). As mentioned several times, including my last post, in the '90s I used to work with the health system in Britain and there was a pandemic response strategy in place in the UK and elsewhere. The strategy kicked in during the Anthrax scare of late 2001, for instance. But it has been steadfastly ignored for Covid. Governments have been chopping and changing their response and their strategy every few weeks, and we have all suffered more from their dithering, incompetence and lack of co-ordination with each other than anything else. A worldwide problem should be dealt with on a worldwide basis, not piecemeal with petty nationalisms holding sway. Hold your government to account for this mess. Yes, it is their responsibility and, yes, it is their fault. Whilst they allow toxic debates on whether to allow trans rights or crush them, they're happily letting national health systems fail, confusion reign and people die. And barely tackling the environmental destruction that is the cause of Covid, heatwaves, flash floods and so forth. But then I've said before from my experience dealing with the British government and several others that the purpose of government is to brutalise, nothing more. We all assume a paternalistic approach from a body that we vote for, but that's false, as you can perhaps now see.

And related to incompetence and brutishness, especially when it comes to people's lives, I've had enough of my sister's bigotry around LGBT rights, too (see my post Hello, Lugbutts for an explanation). You can't reason with bigots and I'm just going to tackle her head on now and make her as uncomfortable as she makes life for us. I'm tired of trying to be nice to nasty, ignorant people. I'll let you know what outcomes there are. They won't be good but it's time transphobes experienced a bit of anguish, too. They're not happy that the overwhelming majority of trans people already live hidden for fear of ridicule, censure and violence, but this unholy alliance of normally antagonistic groups of religious conservatives, radical feminists and nationalist politicans seem to have a need to eliminate all sight and sound of trans folks altogether. Time to crack heads, I think.

Someone reminded me of this photo this week, taken in Berlin in 1921 for the First International Congress on Sex Reform at the Institute for Sexual Science. Trans people showing they exist. 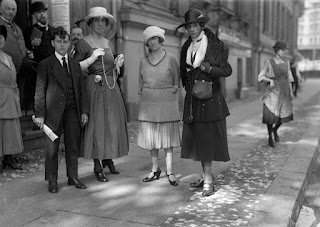