A recent post by Lynn got me thinking about the worries of being recognised even when presenting female and, above all, of seeing one's male facial features despite the makeup and hair.

I am fortunate that my appearance when I'm Sue bears little physical resemblance to my male alter ego. The hair and makeup and jewellery really do make a big difference. Yes, I can see that my nose and chin aren't right for a woman, but I don't really equate those features with my 'official' face as they're only parts of the whole that disappear under the artifice.

I clearly recall the first time I ever had a proper makeover. I am very short-sighted and had to take my glasses off in order for Jodie at the Boudoir dressing service to do my makeup. So the fact there was a mirror opposite meant little as I appeared to me as just the same amorphous blob as I see in a hairdresser's mirror when I'm having my hair cut. Then she put a wig on me, told me to close my eyes and then handed me my glasses. When I opened my eyes I was left staring at a woman and it took me several seconds to realise that the woman was me. It sounds really dumb, but it just didn't register at first that I was she. Logically I should have known it was me straight off, but the sight threw me as I could see nothing of the familiar me at all. A unique and unforgettable moment.

The fact I don't spot my male face is not the same as saying I pass for female. I do the best with what nature gave me and, on a dark night with a balaklava on, I guess I pass for female! Joking aside, I do make a conscious effort to create the look that I have honed over the years and that I feel suits me best, chiefly with the thick hair and the heavy makeup. Overall, it also helps me that I am petite but I know and appreciate that having a tall, large body can seem a big obstacle for many TGirls.

I feel sad when trans friends say they feel they need plastic surgery primarily to remove the small remains of male traits they see in their faces. That's dysmorphia for you, sadly. I am not an advocate of surgery except as a last resort in serious illness, but your playbook is different and it may be totally right for you. My suggestion, though, on plastic surgery of any kind, would be first to deal with any psychological aspects of what is bothering the patient and then approach surgery to deal with any features that may still be felt to be defective. I used to work with doctors and so many of them said that too many people seek medical intervention - from pills to abortions to surgery - when they are unhappy rather than ill or injured.

So often our trans lives are dictated by fears of being read as not female, of not passing, even after years on hormones and after GRS. The efforts and expense we trans people go to to look like the sex we identify as in order to be treated as that sex is extraordinary and it's the harsh judgmental treatment of society that makes us go to such lengths; some trans people to great extremes to hide any idea that they were ever trans. Societal norms, judgmentalism and threats of harm and ostracism are the real issues, the bane of our lives. It's hardly improving with the increasing attacks on us by religious bullies, hardline feminists and other transphobes. I don't like wearing makeup at all, it damages my skin and feels horrible. But since being called "Madam" in a shop is the most wonderful thing in the world, I go through with it as there's little other way of attaining that goal but to look as fem as possible. Many thanks to service staff who are prepared to use the right terms of address to us even when they clock we are trans.

If you still see 'him' when you are her and it bothers you, do seek support from your trans friends and allies. It doesn't bother us, although I appreciate that's not at the core of your worries. But other trans people can give advice, share experience, suggest other ways of looking at the problem, or feminising it with our wonderful clothes, hair, makeup and accessories, as well as offer emotional support. Reframing the problem helps. Is is really just disappointment? I think we all get that. I'd love to look like Bettie Page but I never will! (Maybe Bettie Page wanted to look like Marilyn!) I think it's a much wider problem than just a trans one or just seeing residual masculinity.

It's not easy being trans - so much to fret about. But I think our specific experiences can be seen within the wider frets of humanity, especially regarding appearance, presentation and our social status. I don't know any woman who doesn't fret about her appearance, whether she's too fat, got bags under her eyes, is getting wrinkles, etc. etc. Not even so much to appear attractive as to cope with the rivalry and judgmentalism of other women. Our frets as trans women are not the same, but what is the same is the fact that we fret about our appearance to avoid judgment. A kinder world would help.

Three years ago, in a similar heatwave to the one right now, I went out in London, one of my last trips there. Here's my report, and you can see in the photo that I have just foundation and lipstick on, no other makeup, which is the bare minimum I can manage and still feel feminine. Link: An evening in Chinatown 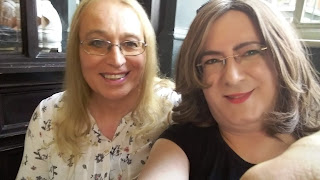