Mondays are my weekly weigh-in and I've now broken well through the target of 2½ stone (16 kg) I'd planned to lose between New Year and Christmas this year. Maybe I'll make it to 3 stone off by Christmas, then. That would be pretty amazing.

Astonishingly, I've lost more than an inch (3 cm) off my waist this week! I can actually see the difference.

It's not the fastest I've lost weight. 2½ stone in half the time (5 months) in 2005-06 was very good, I thought, but then I was going to Slimming World so focusing was easier.

The other week I was excited to be close to my weight loss target for the year and dolled up for some photos, largely to record how I was looking. I had hoped to do the same yesterday and combine it with a sexy vampire look for Hallowe'en. But I didn't quality control the cheap fangs I'd bought before donning them for the first time yesterday... and they made me look like a bulldog! So no photos of the result will ever be posted here! Ever!

This year I've lost weight not so much by following a programme like Slimming World's but simply by cutting out ham and bacon and draining excess oil off anything in a jar or can. Both pork and oil are everywhere here in Italy but Covid has restricted access to restaurants and other people's kitchens which means I've had much more control over what goes on my plate. Thanks Covid!

The most fattening thing of all is red wine (followed closely by white wine!) but if you're not eating socially you have less desire or need for wine. Frankly, spirits are not so bad for weight gain, hence the fruity cocktails I devised over the summer.

It's becoming harder to lose weight now that the autumn is here. In summer there were swimming pools open, and heaving my shopping up the mountain road in 30°C heat was a good boost to the programme. I'm going to have to concentrate more on what I eat as my excess weight is more modest now so it will become harder to lose the remainder.

Wish me luck. I'll share more tips and tricks on weight loss another time. But the main thing is to have a genuine desire to lose weight. It's a state of mind as much as anything. I needed to lose weight and it was time.

I was going to write about this topic today but I prefer positive news. Maybe next time. I'd like to make suggestions on dealing with public consultations, on which I have more experience than I care to recall. And I'd like to comment on the loss of the anti-discrimination bill in the Italian parliament that would have really helped against transphobia. I'm not sure it's so bad as we thought as it shows those who scuppered the bill in a very bad light.

So I won't be showing you what I looked like yesterday with my bulldog fangs in but here's a picture from Hallowe'en ten years ago when we went to the last fully operating ballroom in London. My writeup of that fabulous evening is here: Magic Theatre Hallowe'en 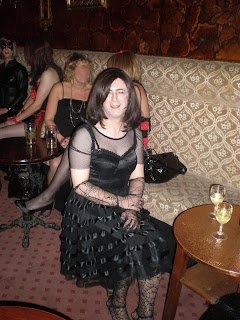